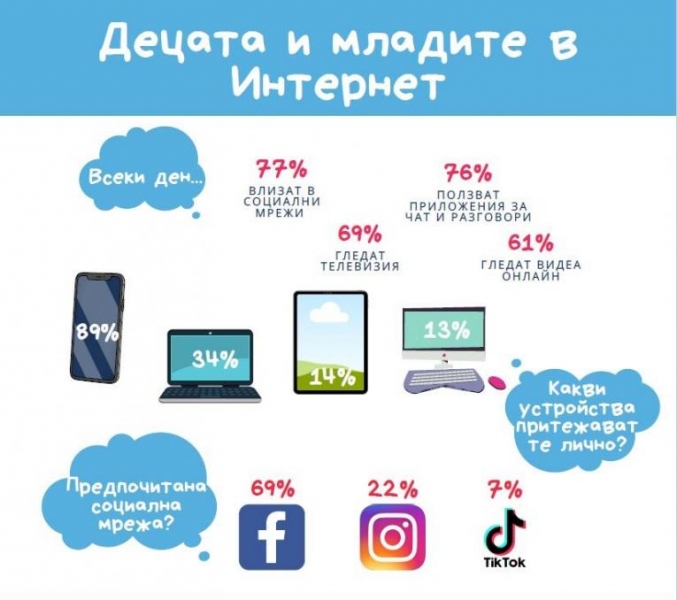 Three-quarters of children and young people in Bulgaria surf the social networks and communicate through online applications on a daily basis. Even though they use digital media almost constantly, most of them find that what is happening in the real world is more important and exciting. These are the findings from a nationally representative multicomponent study "Media consumption and influencers of children and young people in Bulgaria", conducted by the research agency ESTAT, commissioned by the UN Children's Fund - UNICEF Bulgaria. The study implies quantitative component with a sample of 1,773 people between the ages of 10 and 24, as well as six online discussions with participants in the same age range. The focus is on the media habits and practices of children and young people, celebrities on the Web, as well as the extent to which digital technologies help them to express themselves and achieve individual and community goals.

Even though they spend plenty of time in front of the screen, children and young people do not believe they are addicted to digital media. They talk about a daily life filled with live communication, and most of them share with dissatisfaction that the pandemic and online education forced them to spend a long time in front of the screen instead of being outside with friends. Many of the participants think critically towards their online presence and how digital technologies contribute to their personal growth. On the background of prevailing optimism for a bright future, in the discussions quite a few participants share fears that in the coming years communication will more and more lack the live contact.

There is a high level of digital inclusion and connectivity – nine out of ten respondents have a personal smartphone to access the Internet. However, it is worrying that more than half of the participants do not have their own device suitable for optimal satisfaction of their educational needs (such as a laptop, desktop computer or tablet). Providing access to devices that meet the digital educational needs of all adolescents is still an unfinished task in Bulgaria.

As expected, the findings show digital media as Facebook, Instagram, TikTok and YouTube as most liked and used. Among the traditional information channels, only television still has a high level of popularity, while newspapers and magazines almost never find a place in children and young people’s routine. Attention to the TV screen is often partial because watching TV is usually accompanied by browsing and chatting on social networks. Short videos uploaded to video platforms and social networks stand out as a favorite and most watched format.

Most preferred are fun videos, music videos, beauty, health and fitness vlogs. About a third of those who like online videos watch educational materials. The interest towards more serious media contents, such as popular science or news-analytical materials, is significantly lower.

Surprisingly, only one out of four respondents follow “influencers” actively, while every second participant shares that they follow “vloggers” online. A conclusion of the study is that children and young people would ponder the opinions shared by influencers and other celebrities, but they would not aim to look, think, or act exactly like them. They are certain in their own ability to pursue and achieve their goals without following figures, serving as an example.  There are three groups of online celebrities - those who mainly aim to entertain; those that talk about health, beauty, lifestyle, fitness and fashion; as well as individuals whose online content aims to inform on more serious topics, to provoke and inspire the audience.

The study makes an impression of a rather passive child and youth audience that uses digital media regularly to watch videos, listen to music and view profiles and pages on social networks. The active participation of most users is mainly for online communication with friends online and sporadically uploading of selfies and other photos. Sharing user-generated creative content, commenting, and participating in online interest groups is rare. Many Bulgarian children and young people miss opportunities to express themselves and their opinions on important topics, as well as to cooperate in creating online communities working together for a common goal.

What was shared by the participants shows that behind the online behavior that is rather passive and lacks self-expression, lies both the lack of self-confidence and certainty of some children and young people and the unwillingness to engage in depth in the sometimes misinformed and hostile online environment. Many participants point out online "fake news" and "hate", such as ridicule, personal attacks and insults, as reasons for their passive behavior.  And while about one in ten shares that someone has been abusive online in the past year towards them, five out of ten say the things they read and see on the Internet bother and upset them. In order to increase the confidence of children and young people for more active and constructive use of digital media, it is necessary to promote online tolerance, as well as building digital media literacy and skills for recognizing and dealing with the risks of the online environment.

The vast majority of respondents believe that the Internet has an empowering role and is an effective platform for discussing the rights and issues of different communities. Children and young people are tolerant to interpersonal differences, freedom-loving and supportive of the unobstructed expression of identity. The prevailing attitudes and values among children and young people are the foundations on which a digital environment may be built, in which they can express themselves confidently and freely, as well as to implement various social causes and projects.

Among the main trends registered in the vulnerable participants group are the greater restrictions on access to digital devices, as well as overall lower levels of engagement with social networks and use of the educational potential of digital technologies. This observation emphasizes the need for interventions, as for disadvantaged children and young people, digital connectivity can mean the difference between social exclusion and equal opportunities.

Authors of the article:

The CLASS project is implemented with the financial support of Iceland, Liechtenstein and Norway through the EEA's financial mechanism. The aim of the project is to encourage the media literacy and civic education.

The entire responsibility for the content of this article is held by the European Institute Foundation and under no circumstances can it be assumed that it reflects the official opinion of the Financial Mechanism of the European Economic Area and the Bulgarian Operator of the Active Citizens Fund.